Drawings of Pee-Pees and Wee-Wees: "In the Arms of Nightmares" by Robert Dean 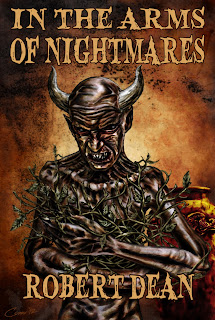 The author himself, Robert Dean, asked me to review a copy of his book, and I was more than happy to oblige. When he told me what it was about and I saw the publisher (May December Publications), I was definitely on board.

In this novel, you’re taken into the mind of Arthur Reilly, a war vet who lives through VE-Day, and in the process sees horrors most can’t even imagine. After watching his platoon get completely wiped out, Reilly snaps and develops, more or less, the worst case of shell-shock in history. He believes he sees visions of hell and the devil, and it causes him to absolutely snap.
Reilly moves to Paris after the war to become a chef, something he found he had a talent for during the war. However, his visions get worse despite the peaceful life he’s found for himself, and he cannot control them. Believing he is on a path to “The City of the Dead”, Reilly begins not only killing random people for a number of reasons, but cutting them up and serving them as food in his restaurant. Reilly becomes addicted to murder and cannibalism, and when you add that to his addictions to sex, jazz music and alcohol, Reilly becomes dangerous beyond control.

Thanks to graphic detail throughout the book, Dean forces you to picture everything that happens to Arthur Reilly during his lifetime, with the more gruesome acts described in even more explicit detail. And you know what? That is okay in this book. It becomes apparent very early on that Reilly is not a good human being at all, and the graphic depictions, if nothing else, show you just how truly evil he is. At the same time, Dean knows how to condense the details in the book so reading it doesn’t feel like a chore. The book is just over 250 pages long, and thanks to Dean’s style, it is a very fast read that is hard to put down.

While I was disappointed with the ending, that quickly dissipated when I learned that Dean was working on a sequel (no, this isn’t a spoiler, don’t worry). Based on that, the book ended about how I would expect, and it just makes me want dive back into the twisted mind of Arthur Reilly once more.

If you have a weak stomach, In the Arms of Nightmares is definitely not a book you want to read. While horror fans will definitely appreciate its very macabre nature, those not interested in the genre might want to stay away.

And that is a compliment.
Posted by XDustinEFLX at 1:09 AM

Email ThisBlogThis!Share to TwitterShare to FacebookShare to Pinterest
Labels: Books, In the Arms of Nightmares, Robert Dean

XDustinEFLX
I'm straight edge and I don't hide anything. I am currently a writer for Camel Clutch Blog, Sportskeeda, Fitness Inked, and occasionally do video game reviews for Burning Angel. I'm comfortable talking about anything and everything, so if there's something you'd like to know, just ask.

Friends of the Blog