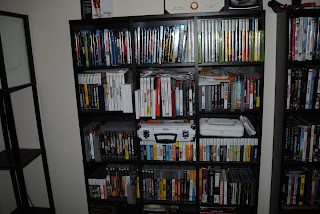 So, in my last visit to the shelf, I gave my review of Assassin's Creed II, this time, we look at its successor, Assassin's Creed: Brotherhood. Brotherhood continues where the last game left off, with Desmond and his crew of assassins-Lucy, Shaun and Rebecca-escaping Abstergo's grasp and continuing their research on Desmond's ancestor, Ezio. This time around, the crew has set up shop in Monteriggioni, in the very same castle Ezio made his home in the last game. After setting up shop, Desmond continues to live virtually through Ezio using the Animus. Within the first little bit of the game, Ezio's uncle Mario is killed by Rodrigo Borgia's men (Ezio allowed Borgia to live in the last game). The attack, led by Rodrigo's son Cesare, sees Mario get killed and the Apple of Eden once again within the grasp of Borgia and the Templars. The Borgias and their army return to Roma in order to seize total power and control Italia. As Ezio, it is up to the player to follow them to Roma and not only regain control of the Apple, but restore order there as well.

Throughout the game, Ezio takes on various missions that bring him closer to the Apple, Cesare and Rodrigo, from helping keep the local Courtesans (an early version of what we know as prostitutes) safe, to killing Borgia captains and destroying the inventions of Leonardo da Vinci. While da Vinci is still an ally this time around, you learn that he was forced to create weapons of destruction (based on da Vinci's actual inventions) or die.

As you continue through the missions, there are several side quests that you can complete in order to earn more money and experience. Collecting feathers is once again present (although there are only 10 of them this time, instead of 100), as is collecting Borgia flags and Keys of Romulus. The Keys of Romulus are similar to the Assassins Seals from II, and when you collect all six, you unlock the Brutus armor (I highly recommend doing this). One other concept that was added in this game was recruiting assassins. Throughout the game, you will get the chance to recruit regular citizens of Roma that are being harassed or attack by the Borgia soldiers. Once you have saved them, they will automatically join the Assassins Guild and can be sent on missions to collect money, experience and rare items. Plus, they can be called upon to assist you in fights or in any situation where it's necessary to get rid of soldiers. They are extremely effective in attacking the soldiers, and they definitely come in handy in later portions of the game. 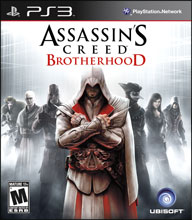 One other very important side quest in the game is the Borgia towers. These towers are scattered throughout Roma, and every time you kill a Borgia captain and then burn down the tower (you must kill the captain first, though), the surrounding area will no longer be under Borgia rule. What this means is that shops, banks, aqueducts and landmarks can now be purchased and renovated. Doing this opens up more options for weapons and items, as well as allows you to collect the paintings that are placed in the hideout once purchased. It is recommended to do this, as each renovation not only gives you more purchase options, but brings in more money for the city, which can be collected by you at the banks.

The glyphs are once again available in this game (only 10 this time around), and completing all glyph puzzles takes you to a brief climbing mini-game that puts you face to pseudo-face with the notorious Subject 16, and also gives you more information what the Animus tests really prove.

Once you begin your final descent in the game, you wind up face-to-face with Rodrigo Borgia once again, and have to stop Cesare in order to get the Apple back. Going after Cesare requires chasing him back to Monteriggioni for the final battle. Without spoiling too much, Ezio winds up killing Cesare. In the process of this, Desmond discovers through a glyph the location of the Apple (the reason he and his friends are in Monteriggioni in the first place), which leads Desmond to the world-famous Coliseo for the final search. While on the search, Desmond begins hearing messages from Juno, a similar being to that of Minerva from Assassin's Creed II. He and the crew finally find the Apple, but do not know how to activate it. Desmond touches it, which turns out to be the activation key. It freezes time around him, and we once again hear Juno's voice:

"The cross darkens the horizon,
The Path must be opened,
The scales must be balanced.
You know so very little. We must guide you!"
This leads to the ending scene, a shocking moment where Desmond becomes controlled the Apple and is forced to kill someone. I won't say who gets killed, but it is pretty surprising. Desmond then falls unconscious, and we see the end credits. While the credits are rolling, you can hear two men talking about Desmond's health, and how the only way to save his life is to put him back in the Animus.
Overall, this game was a great experience, but I did have some minor complaints. First off, all of the missions in the game can be completed either 50% or 100%. In order to get 100%, you have to fulfill a second task on the mission, something like finishing it within a certain amount of time, using a specific weapon, etc. While it's easy to get 100% on many of these missions, others are damn near impossible. Also, Leonardo's world-famous flying machine returns in this game, but the mission it is used for this time is much longer and much, much more frustrating. Also, the soldiers can be easily defeated in practically any situation, whether you are relying on your recruited assassin's or not. Finally, while Roma is huge, aside from some very brief time in Monteriggioni, it is the only city in the game, as opposed to the variety of cities in the last two.
These are minor complaints, though. Adding the renovation aspect to the game makes for a fun little excursion, the Keys of Romulus missions are much less frustrating than the Assassins Seals missions from the previous games, and collecting the feathers and Borgia flags is very easy to do. I found all ten flags, and I believe 96 of the Borgia flags without looking online, so they are not so hidden that they are impossible to find. Also, the assassin recruits were a nice addition, and made some of the tougher missions much easier, as well as allow you to collect more money and rare items for Shop Quests. And the city of Roma was very nicely captured, including numerous famous landmarks recreated for the game in fine detail thanks to the extensive work the crew at Ubisoft did in going to the actual Rome and capturing the landmarks from all angles via digital camera. The sections featuring Desmond in modern-day (well, 2012, to be exact) are also more engaging, and are very interesting in what they reveal. The scenes with Subject 16 and the final scene definitely raised more questions than they answered, questions that should be revealed when Assassin's Creed; Revelations comes out in November. I understand a much larger portion of the next game will be devoted to playing as Desmond, despite him being unconscious. I'll let you think about how.
Overall, Brotherhood is a fantastic game. It has enough side quests to keep you busy for hours, but not so many that you feel overwhelmed (like in games such as the Grand Theft Auto series and The Saboteur). There are some flaws, but the high points overshadow them, and what you get is a great story that reveals more about its main players. The voice acting is top-notch as usual, the game has incredible visuals, an awesome soundtrack, and highly engrossing game play. As you uncover more pieces of the puzzle, more questions are raised, and each twist and turn left me wanting more. Thus far, it's safe to say that Assassin's Creed: Brotherhood is the best game in the series thus far, and I cannot wait until the next game drops in November.
I give Assassin's Creed: Brotherhood 4 out 5 stars.
Posted by XDustinEFLX at 8:34 PM 2 comments:

XDustinEFLX
I'm straight edge and I don't hide anything. I am currently a writer for Camel Clutch Blog, Sportskeeda, Fitness Inked, and occasionally do video game reviews for Burning Angel. I'm comfortable talking about anything and everything, so if there's something you'd like to know, just ask.

Friends of the Blog